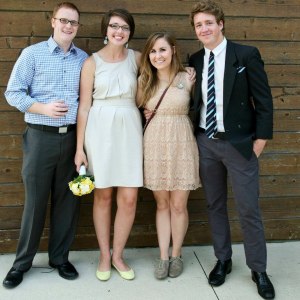 My baby brother Adam turned 21 today. He’s one of those people who could have been 21 a long time ago. In fact, he’s been known to have a glass of whiskey on occasion since he was 16 or 17. My parents got a little relaxed by the time their 5th kid was a teenager, obviously. But seriously, what 17 year old kid enjoys straight whiskey in moderation?! My little brother, that’s who. Most people that know him would agree that one day he was a kid, and the next we was a man. It happened that fast.

All of a sudden he was over 6 feet tall, his baby chub was gone, he had a sense of style and his hair was under control.

The truly amazing thing…well, one of them…is that I literally can’t remember ever fighting with him growing up. And that speaks much more of his character than mine, trust me. A little less than 3 years younger than me, I remember a little boy who did everything I ever asked him to do. And he remembers not my laziness and tyranny (which is what it was), but me spoiling him and giving him money to do said things (I was usually sitting on a pile of babysitting money back in my hay day).

This is the Adam I grew up with and the Adam the remained until that day he became a man. He was extremely loyal, and did as others influenced him-it got him into trouble sometimes. But then something changed. His faith and walk with Christ became very real to Him. And he started to live by the beat of his own drum. As his walk with Jesus grew, he only became more loved by all who know him. If you have even heard of Adam Duvick, you want to be friends with him.

So, happy birthday, Adam. You are truly one of favorite people ever, I’m so blessed that you’re my brother as well. Bryan and I are so proud of who you’ve become and who Christ is shaping you to be.

I think I heard that Boeing really wants to hire you when you graduate…just sayin.’