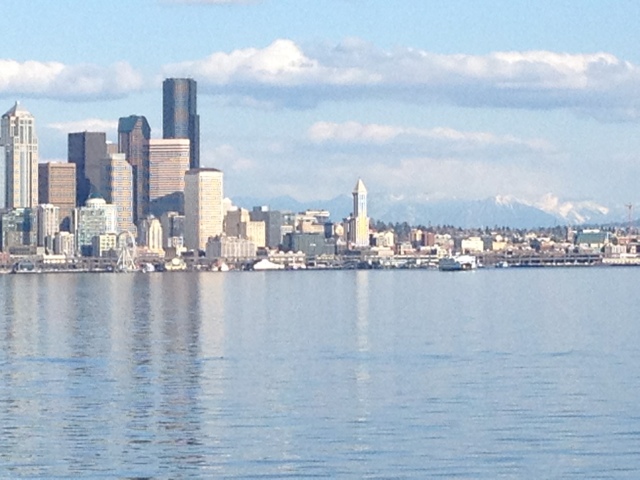 so far, seattle is pretty great. the other morning i got to look at a beautiful mountain range on my way to work. i don’t expect to get tired of that view.

we were smart to move here on the dawn of spring, because we’ve actually had quite a few sunny days. the rain hasn’t bothered me at all, but i already love the sun more as i see it less often.
i’ve been honked at several times. boo. it’s only annoying because i can’t change the fact that the cars in front of me are turning very slowly, so honking at me is pointless. city problems i guess.
on a related note, i officially got stuck in traffic yesterday. it was probably the first time in my life that i’ve ever actually been stuck in traffic since i’m a born and raised iowa girl and all. this wasn’t horrible seattle traffic, this was just downtown renton traffic. but still, we weren’t moving for a good ten minutes.
i noticed the other day that i have not seen a single walmart. anywhere. it’s awesome. only target. i thought about doing a google map search to show you how scarce the walmarts are here, but then i decided that they are probably lurking out there somewhere and i’m choosing ignorance. i’m choosing to live in a world with no walmart.
at bryan’s parents house we have three city issued trash/recycling receptacles. one for trash, one for recycling and one for yard/food waste. the recycling and yard/food waste bins are literally TWICE as big as the trash bin and the trash only gets picked up once every two weeks. crazy hippies. [i secretly love this about seattle and want to be a crazy hippie]
so that’s seattle so far!

One thought on “so far, seattle…”