looking forward to our 2012 budget, we’ve decided to re-name our normal sinking funds category. mostly because they are not really sinking funds anymore.

as i was running the numbers for next year, and looking at our increased goals, particularly in the “sinking fund” categories like eye exams (bryan hasn’t been in a couple years) and vacation (we’ve never taken a vacation aside from visiting family), i realized something: we don’t make enough money to be able to afford all of that.

we do spend less than i make after our giving, bills and cash envelopes. and we do have some extra sources of income like bryan giving plasma and little surveys or odds and ends that i do. and sometimes we’re lucky enough to get into car accidents. but because we can’t count on plasma or those random extra earnings, we can’t count on filling all of our sinking funds little by little each month.

so we’re changing our budgeting strategy around and we’re affectionately renaming our sinking funds to dump funds.

the dump fund: where we dump as much money as possible, as quickly as possible and fill the fund for the entire year in one fell swoop.

it’s similar to the debt snowball in many ways. the main reason i like it because it gives us momentum on our other goals. if we don’t have to save little by little each month for those inevitable expenses, we can put more money towards the goals we’re really ambitious about, like paying off our student loan before it accrues any interest.

i don’t know if it possible, but i’d love to completely cross off the first goal on our list before 2012 even starts. with that said, here’s the update for november! 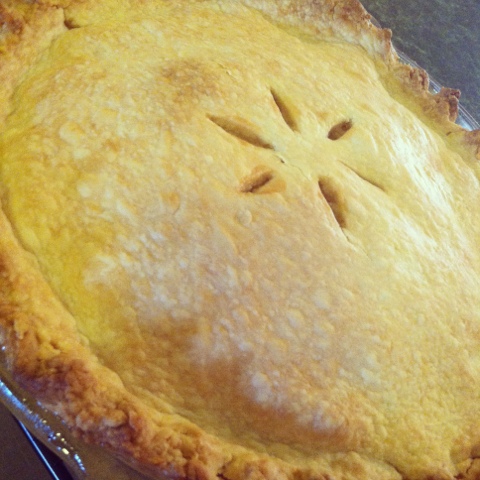 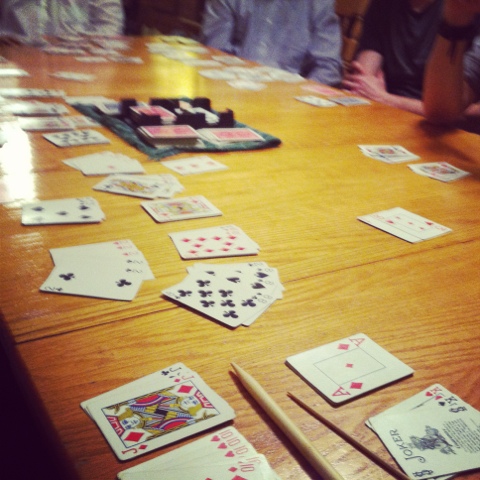 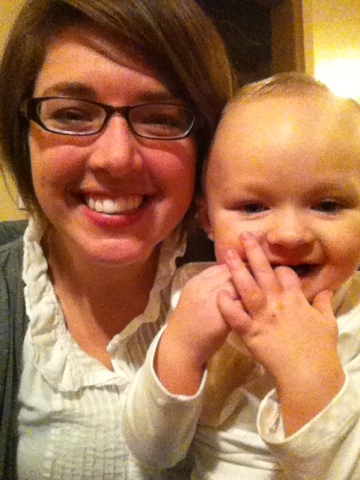 happy faces all around 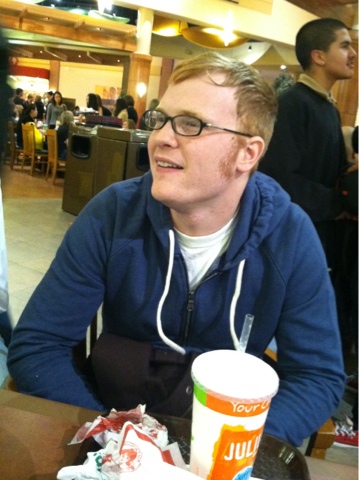 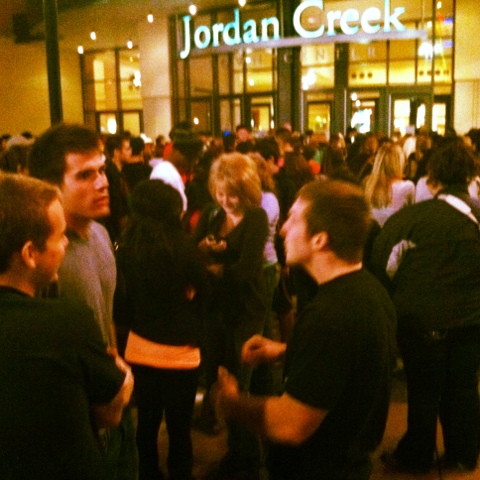 you know you live in a trailer park when…

you watch painfully as the tiny, cute, super old lady with a walker complete with tennis balls walks slowly but noisily to the mailboxes. her walker scrapes along the concrete sidewalk as she inches towards them.

i just wish the mail had actually come that day, because she walked back to her trailer with nothing to show for it. 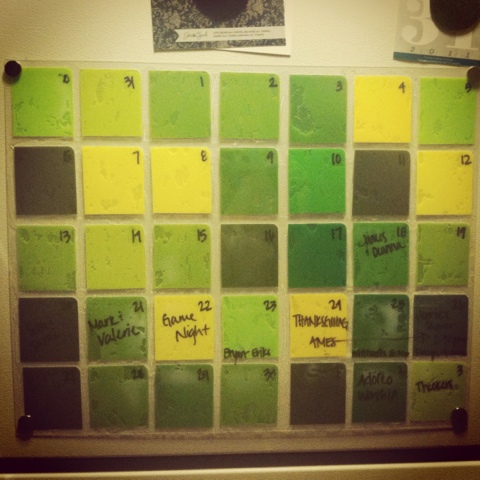 i LOVE giving gifts to people at Christmas, it’s so much fun. there is something so gratifying about finding that “perfect” gift, the one you know will be loved and appreciated. being crafty as i am, i’ve handmade a lot of gifts for friends and family, but i’ve got some family members who are as into the handmade gift-that’s okay too.

whether handmade or store-bought, giving thoughtful gifts at Christmas-time is something i value greatly. i think it probably means more to me than the person receiving the gift.

the thing about giving gifts is that it can be stressful, because it costs money. and giving gifts is just ONE of the expenses that usually comes along with Christmas. we send out christmas letters with a photo card, we go out to eat a little more often around the holidays, we travel, we give more money away, and we just generally spend more money.

i’m not complaining, i love this time of year, and i love all the things that go along with it. even the spending money part. after all, it’s easy to spend money when you have money to spend! here’s how we plan for the Holidays financially:

at the beginning of 2011, we decided on a reasonable amount to spend on Christmas. we actually doubled what we tried to spend last year, because it was too hard to stay within such a small budget. then we divided that number up into monthly increments and saved a little bit each month for Christmas. instead of catching us by surprise, gift-giving is something we can do with out feeling sick about how much we’re spending. i’m so grateful for that.

i also am in the habit of Christmas shopping throughout the year. if i find a really great deal on something, or find something really unique that i know someone will love, i’ll buy it then and just pull the money out of our Christmas “envelope.”

what are your plans for Christmas spending? how early do you start putting money away? how do you save money during the Holidays?

have a great Thanksgiving tomorrow!

food, friends, family
loved ones who we rarely see
happy thanksgiving!
you know you live in a trailer park when…
you see this on trash pick-up day: 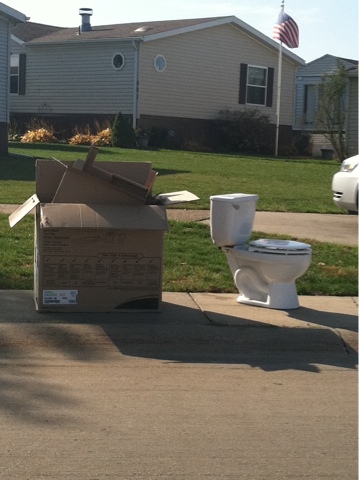 note the american flag in the background. america would be proud.

my mom used to declare, “your room looks like a bomb hit it!” so often, that i actually thought a “bombhitit” was a noun used to describe a very messy room.

well, mom, don’t come to our trailer, because it looks like a bombhitit.

the alsberries have been experiencing extreme discipline issues. our house is a mess, which i’ve allowed for far too long. it started a year ago when i was all like, “i can’t work three jobs and keep the house clean.” that was actually pretty true, but now i’ve had just one job for over four months, and i’m still not cooking or cleaning like i know i could be. somehow, i keep convincing myself that maybe we can live in our own filth, for just a little while longer. wouldn’t that be nice?

really, the problem is at this point that i’ve gotten into such strong cleaning habits, it’s proving hard to break them. especially because these cleaning habits i speak of are mainly the ones where i throw all of our crap into the rooms i can shut the doors on and hide from. seriously, it’s sick.

BUT, there is hope. because i read these two quotes that are going to forever heal me of poor housekeeping habits.

i am the problem.

i am the problem. but i am also the solution.

okay but seriously, when is my house going to get clean again?

well, i’ve finally started working on it. last week, i took my first two 18-gal totes of stuff to the local consignment shop along with a treasure chest-type thing. i swapped clothes at my church’s clothing swap and i took the rest of the clothes i never wear to goodwill. we’re in the process of getting rid of everything we don’t use or don’t need. and it feels good.

after that, i hope to start deep cleaning, because our house could really use it. and my husband and i would both probably function better if it was clean and tidy.

all in all, if it’s any encouragement, i still stink at this “homemaker” thing and i’ve been married for 2.5 years.

saving enough to pay our upcoming u-bill was our last financial goal to complete for 2011 and at the end of october, we were successful! all of our sinking funds have been filled and we just paid the last of our annual irregular bills. in my nerdy financial brain, 2011 might as well be over.
that being said, it should not shock you that i’m already thinking about our 2012 financial goals. they are the biggest goals we’ve ever set for ourselves. some are fun, some are important, and some are essential. and when you add all the goals together, it’s quite a shocking dollar amount.

now, i’ve been really transparent with our saving goal for tuition. i’ve given you the exact dollar amount that we’ve saved each month. i reasoned that if you really wanted to know, you could google how expensive one year at the university of iowa is and figure out how much we needed and were saving. so i figured i’d just post the actual numbers so you could see in reality how much we’re saving for bryan’s tuition.

but my financial updates are going to look a little different in 2012. the main reason being that you can’t google how much we’ve decided to save for a vacation next year, or how much a fully-fund emergency fund is for us. we’ve decided not to make these dollar amounts public, because there really is no need to.

now that that’s out of the way, here’s what we have planned for 2012 (in order of importance):

honestly, looking at the bottom line, to save all of this in one year is impossible. but setting big goals seems to be good motivation for us and public (blog) accountability is an even better motivator for me. AND bryan will no longer be a student after may! not only will we not have to pay tuition, but he’ll actually be working! woohoo!
because we have already completed our goals for 2011, we’re starting on our goals for 2012 now. i’ll blog about our progress at the end of november in lieu of the monthly tuition updates.
happy saving! 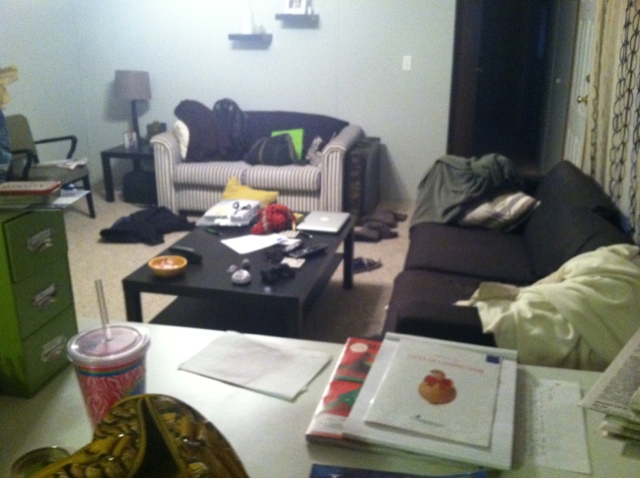