…getting so excited about the deals in target that you forget why you came there in the first place-priceless.

the alsbury’s needed packing tape because we’re moving into a new apartment on july 31st. so, we ventured to target…

i had a bunch of great coupons for some things, and i thought i’d multitask and check out some deals. boy, did i find them! i got everything pictured above for $16.32 with a savings of $56.32! i was so excited!

while we were shopping around for deals, bryan wanted to check out the tvs. we’ve been saving up for a new tv for a while now and we’ve had several fun little chunks of extra income come in so we had about 450 bucks saved up.

so, the tv we were looking at was reduced by another 50 bucks making it $450+tax. bryan then got 10% off by applying for a target credit card (which we’ll probably cancel right after we pay it off) after tax it was less then we had saved up: $435.62!

here’s bryan with his new toy: 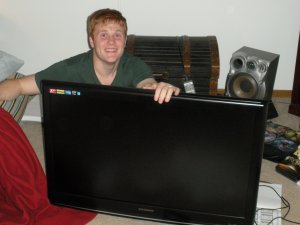 we bought everything with such excitement that we forgot to buy the packing tape. so we went back into target and purchased what we came there for in the first place : )